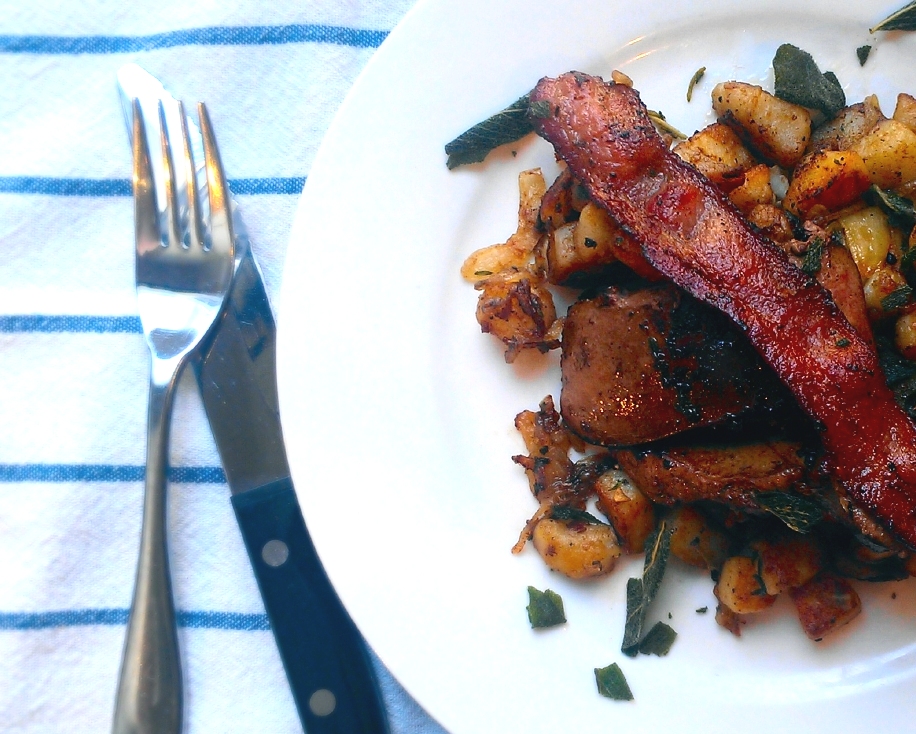 One of the biggest challenges I have encountered in running a small neighborhood bistro has been the issue of meat. This is not to say that I have opened up an abattoir in a vegetarian community. Many folks in this neighborhood are enthusiastic carnivores, especially when it comes to the red meat offerings of burgers and steaks that we grill up in our kitchen. No, in this regard, there are no problems at all. What I am talking about is the parts of the animal that we choose to cook and serve. I am a so-called ‘snout-to-tail’ advocate. I believe that the act of taking an animal’s life is also an obligation to that animal to not waste any part of its body: to appreciate and respect the sacrifice of its life by celebrating it from nose to tail.  Yet sometimes I think I am a bit tentative…maybe even nervous to take my menu beyond the most popular cuts of meat that are generally familiar to the public at large. Sometimes I feel cowardly about it. Other days I feel I am just adhering to sound business acumen. Regardless, it has been on my mind more and more these days.

North Americans seem to be hung up on a very small criteria of what makes for good meat. Strip loins, pork chops, ground beef, boneless chicken breasts and few other choice cuts make up the majority of the meat we eat in this country. When out shopping in large grocery stores with my kids, we have a running joke that we chant like a silly mantra when in the meat department: cow, chicken, pig, cow, chicken, pig!  In other words, this represents the only meat one will generally find in standard grocery stores. Personally, I am interested in a wider variety of animals to eat. This can include duck, rabbit, bison, goat, goose, game hen, capon, mutton, pheasant, hare. quail etc. My six-year-old daughter has eaten more duck in her short life than I did by the age of thirty. This gladdens my heart, for the occasional bite of rich, roasty duck meat is something that one should not miss out on in our O-so-short lives. It is a genuine pleasure.

But there is also the question of what parts of the animal one should experience. A cow is not  just a collection of steaks floating in space, nor is a chicken merely a disembodied, deboned breast nor a pig, just a chop. These living creatures are made up of a vast array of complex and very different muscle groups that all provide a different cooking and eating experience, this is not even to mention the offal cuts that are largely ignored by most North American consumers.

At the same time, I have to realize, as a business owner, my job is to provide customers with what they want, that being: cow, chicken, pig. Many people don’t want to be challenged with something strange and unfamiliar when dropping money on a meal in a restaurant. They seek pleasure and enjoyment that a good meal can provide. I know there are consumers out there that are like me—the sort of ‘try anything’ kind of adventurous foodie. Most however, are understandably cautious about what they stuff in their gob. Let’s face it, there is no comfort more visceral than that of familiar food – who am I to push my food politics on to paying customers? We are simply not the hip, downtown resto like The Black Hoof or Bar Isabel that has people lining up for horse tartar or braised tongue and although I am envious of their success, it was never my intention to operate anything more than a cozy local boite. So there it is.

But at the same time, I feel like I should try to follow my own food ethos; the very values that got me into this business in the first place. It is a conundrum that is proper fodder for a self-reflective foodie blog such as this one.  So, if you’re still reading at this point, let’s explore this topic a bit further.

I grew up eating pork chops, ground beef and chicken breasts, often over-cooked, just like most kids did back in the last 1970s. Like most kids today. Things like liver, kidneys, or tongue sandwiches were jokes to our parents – scary, cautionary tales of how bad food used to be; unpleasant childhood memories of post-war Canada. Badly cooked liver seems to be  particular maligned among my parent’s generation, especially those of U.K. ancestry.  (Please note I’m being a bit culturally one-dimensional based on my own experience – immigrants from all over the world have a much different perception of meat and offal cookery – often much more enlightened than that of my ‘WASPy’ family) So my parent’s generation generally chose not to purchase tongues and offal and stuck with the choice cuts which, while only slightly more expensive, were not bank breakers and certainly plentiful enough in the 1970’s to have on the table most nights. Back in the 1950’s, when my father was young, a prime rib roast was rich man’s food. Working families ate stewed mutton,  sausages or the aforementioned liver. By the late 1970’s a really nice piece of beef had become an affordable luxury, and as the 1980’s factory feedlot beef became prevalent, a beef rib roast was practically a Wednesday night throw away.  So if you can get prime rib on a Wednesday, why on earth would you be mucking about in your kitchen with lamb’s kidneys or calf liver?  This seems to be when a major cultural change occurred – meat became so plentiful and cheap, the best bits were reserved for humans, and the rest, well, it ended up being used for other purposes…largely for the so-called ‘rendering’ industry which converts all the odds and sods that no one wants to eat into a stable, heavily-processed protein product with a long shelf life and low bio-hazard risk – it is usually packaged as animal feed – and as has been seen in the past, often cannibalistic in its application. A lot of the unused parts of slaughtered animals are simply buried or burned.  As recently as a couple of generations ago, every morsel of meat was precious. It takes a lot of care, feed, water and land to raise an eating animal like a steer or a pig.  Once the industrial process took over this, we could all afford to waste it. If feels wrong to me, but his is a cultural issue that runs long and deep and is not something for which I pass judgement on people. It is just the way it is.

Along with my own family, I have many dear friends for whom I love to cook. I am a passionate cook, I love to entertain and to me, it’s all about providing pleasure – no surprise that the hospitality industry beckoned to me. However, as with my restaurant guests, I don’t usually have the courage to challenge my dinner guests with weird organ meats or bone marrow. Why? I am afraid that it may be too much, that I will be pushing it on them. Maybe out of politeness they will eat something with which they are not comfortable, and next thing you know, we’re not having fun anymore. Yet, I want to share the pleasure that these ingredients have given me. I have discussed this with my friends, and like most people, they were raised with the basic meat cuts…offal cuts seems foreign, icky, certainly not for human consumption. So, needless to say, it is not just the public for which I agonize over this, it is even among my own friends and family.

The image below was snapped a few years ago. It is a pan-seared lambs liver, with a strip of crispy bacon, fried sage and sauteed potatoes. It was a heavenly supper…. and I would never dream of feeding this to my friends. However, there is a part of my brain that says I should try…perhaps they will like it. In fact, I am sure they would like it. However, have I overstepped a bound of some kind here? Perhaps it is therapeutic to simply write about it. 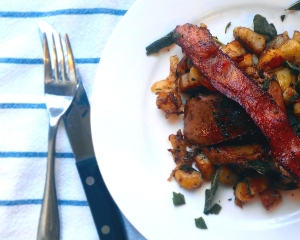 Although this topic is often on my mind, a specific catalyst that got me thinking about this more recently was a delivery that arrived from  a small, family run farm in rural Quebec: four pig heads. Yes, you read that correctly, four pig heads. These heads came from Yorkshire pigs, born and raised in a pastoral setting that is a throwback to the way farms used to operate many, many moons ago.  This kind of meat is prohibitively expensive for a small restaurant – a rack of ribs or a tenderloin from one of these animals would send prices on my menu soaring out of the range that most people would feel comfortable paying in a small neighborhood joint. For example, the pigs we use currently for our pork chop dish are from small, sustainably run Ontario farms. They are well run, well managed and free of unnecessary animal cruelty, but still relatively large volume projects that provide a competitive price scale. The heads on the other hand came from pigs that literally have free run of the local woods  nosh on acorns and live as natural as possible. These pigs grow slower and yield less – not business friendly: but the taste is where it’s at. So how do I experience the sublime flesh of these artisanal hogs? Skip the body altogether and go straight for the head—a price difference that makes this kind of meat available again to the regular consumer.  To be able to take such raw materials and convert them into something delicious is a testament to the talent I am so lucky to have working in my kitchen.

Now, unless you’re a butcher or a very adventurous foodie, the idea of a pig’s head probably does not instill appetite the way some succulent baby back ribs might.  But don’t give up so easily on it. Guanciale, an Italian charcuterie similar to bacon comes from the jowls of a pig. Some of richest, most beautiful pork terrines are derived from the meat of a pig’s head. With the unfortunate moniker of ‘head cheese’ in the North America, a pig’s head terrine in the U.K. is referred to as a ‘brawn’. This dish is ancient and has similar iterations in most European cultures. Once in the form of a terrine, this dish looks for all the world like any other pate, however the work and labour required to make that neat little square of succulent pork involved items like saws and hammers. This kind of cooking is common in Lyons, Barcelona and Tuscany, but it simply doesn’t appear on the radar of us North Americans. I love it. Butchery to me is like decoding some kind of puzzle. Perhaps I am a bit eccentric this way, but I really wish everyone would try some pig’s head!

Post Script: It has been a couple of week since I wrote this entry, and I’m happy to report that our little pig heads have gone into various specials as well as our charcuterie plate. They have sold surprisingly well, even the fried pigs ears! Our charcuterie plate has included English style brawn, otherwise known as head cheese, and it has gone down a treat with the guests.  Perhaps I underestimated the adventurousness of our local diners.

Sweetbread remain a bit of a hard sell, but what doesn’t sell is just more perks for chef and I!