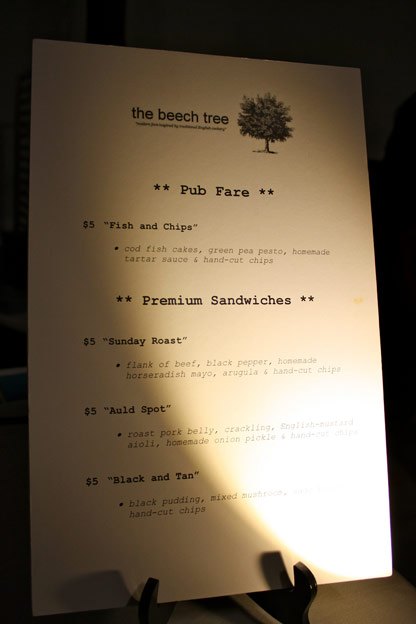 I just learned recently that this September will mark the final night of the Toronto Underground Market. This is very sad news. The photo above, taken by Toronto Life magazine at the inaugural underground market, was the very first Beech Tree menu ever presented to the public.

This market, for all intents and purposes, is the genesis of The Beech Tree. Rewind three years ago: I was a broadcast analyst for Telefilm Canada. One lazy Saturday morning,  I was leafing through the Globe and Mail and found an article about Hassel Aviles, the founder of the market. After visiting a hippy-homecook-powered food market  in San Francisco (which was ultimately shut down by health authorities), Hassel was so inspired that she threw caution to the wind and took a shot at something similar in our fair Toronto. She reasoned that it was possible to make such a thing work if the project was developed in conjunction with Kafkaesque municipal considerations.  It was an absolute bureaucratic nightmare to allow home cooks to sell their food to the public – and it seemed to be the most daunting of tasks, but somehow, she pulled it off, and after reading the Globe’s interview with her, I promptly signed up and  was among the first group of guinea pigs to get a booth at the market on September 24th, 2011. It is likely one of the most important experiences of my second career as a restauranteur and a purveyor of fine foods; maybe even of my life in general. It was terrifying and overwhelming, but also exhilarating and it became a catalyst for so many changes in my life thereafter.  I will forever be indebted to Hassel and her taco-maestro partner, Andrew Richmond for their kindness, generosity and all around encouragement in what is likely one of the hardest industries to break into. I am among the so-called “TUM Alumni”, which also includes La Carnita, Home of the Brave, Rock Lobster Company, Fidel Gastro’s, Babi & Co and Westside Beef to name a few. I recall a young, Ottawa brewery called ‘Beau’s’, well into their break out into the Toronto market, pouring their wares on that night – the first organic beer I had ever drank.  I am proud to include myself among this group.

To understand what it is to have a booth in TUM, is to think about riding a roller coaster, naked. Sort of. The expectation is to prepare enough food to feed at least four hundred people. We had to audition our food just to get in to the market – which in itself was cause for a generous level of anxiety.  Once through that round, it was not unlike those television cooking competitions on the Food Network – a bunch of young, inexperienced home cooks jockeying for space in a small commercial kitchen with only two ovens and one stove top. Table-top butane hobs were offered to make up for the lack of equipment. I would have to say it would be challenging for even a seasoned chef to pull it off. I was on my own for many hours, doing the first and second cooks of my triple cooked chips, assembling cod fish cakes and slowly roasting a pork belly in the oven that I had to commandeer by arriving very early in the morning. I had some friends join me eventually and the pace picked up, but our first underground market opened with us barely being ready. I was literally whisking the oil into an aoili for the beef flank when a massive  line-up started to form at our booth. I had left my tongs and serving utensils back in the kitchen, so we started serving up food with little plastic forks until someone could get the errant gear. The health inspectors came by with laser powered thermometers and told us our chafing dishes weren’t hot enough; we had only just lit them.  All our English chips and fish cakes were cooked in two small electric deep fryers. We kept tripping the breaker on our power bar, so we had to make due with only a single four-litre fryer. (A learning experience – the market now requires rentals of gas-powered fryers) A massive group of people started forming, waiting patiently (and some impatiently) for fish cakes and fries or pork belly or beef flank sandwiches. There were moments when  I just wanted to crawl under my booth and hide.  It was indeed, a mad scramble, but when it was finally over, we had fed almost three hundred people before selling out of everything. People liked my food and said as much. Or blogged about it.  Toronto Life magazine came to my booth and snapped the shot at the top of this posting.  I was exhausted, but so very proud. There is an adrenaline rush like no other when preparing food and feeding the public. I got a taste for it that night.  I returned to the market again, but was never a regular vendor. The commitment, both in time and financial resources strained my young family at the time and I also had a full time job to which I was dedicated. However, it made me dream big. I reasoned that if I could dedicate all my time to such an endevour, it might actually work. Now it is 2014, I am approaching the one year anniversary of the Beech Tree’s brick and mortar iteration.  It has been a long ride to get here and there is a long way to go yet, but that night in September all those years ago is where it started. My first booth barely broke even, and that was with volunteer staff. I also bought the highest quality ingredients for my booth at retail prices. Even in the beginning, the quality of the ingredients have always been critical to making this work.

I have to admit, I am sometimes envious of the cool factor that a lot of TUM alumni have. I am more of a food geek, fascinated by butchery, science, food provenance, food politics and food history; I don’t really fit in with the badass kids with tattoos that have made restaurants more than just a places eat.  Don’t get me wrong, I admire restaurants like La Carnita that have a distinctive and modern approach to their branding and concept. Along with their sister restaurant, Home of the Brave, they have perfectly captured the zeitgeist of the current, rock and roll Toronto food scene.  The Beech Tree is a little more traditional,  if anything, simply because maybe I am. Perhaps chef is a bit old school too. Okay not that old school, we’re probably the only restaurant east of Greenwood rocking sous vide circulators (we have two), CO2 whip siphons (we have half a dozen), and the occasional dabble into WD50-style transglutaminise among other molecular gastronomy goodies.

When the late Steve Davey of NOW magazine reported that the Beech Tree is not the trendiest trat in town,  I have to admit, it stung a bit. I guess in the end we are what we are – maybe not really trendy or cool, but I have to say, we started some place that is: the underground market. If anything, that gives this dork a little street cred.

But I digress. All this is to say, I wish Hassel, Andrew and all the other TUM staff, volunteers and vendors the best. The TUM has become such an important event to so many small, burgeoning businesses in this city, that there will be a large void left in its stead.  Maybe the market will reappear some time in the future – here’s hoping. There are a lot of talented home cooks in this city – it would be great to see more TUM Alum opening restaurants in Toronto – each one is an expression of personal food passion and a way to stick it to crappy corporate chain restaurants. Because Toronto deserves better.