In Search of Summer Cooking 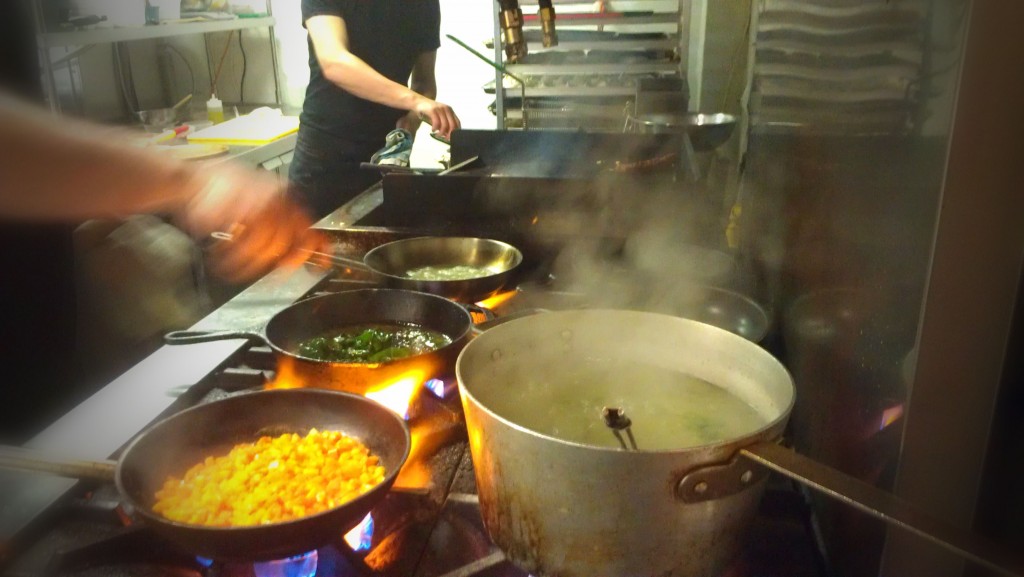 During a busy service a month or so back, Chef mentioned off-hand to me that perhaps it was time to retire our grilled steak dish for a while.

It had been a regular menu item for a couple of months. Previously it had been a Thursday night (and sometimes Friday night) special. It was terrifically popular as a special, but after some time as a daily fixture in our repertoire, it seemed to lack the lustre we originally saw in it. Don’t get me wrong, it was an excellent dish. I always wanted a steak on the menu, and as much as I love steak frites, it had to be a bit more original to get on the menu at the Beech Tree. Chef hates when fries are served with everything—it’s not terribly creative. I tend to agree; no fries on this dish. We also avoid the more typical restaurant beef cuts in flavour of harder-working, more flavourful parts of the cow. So our steak dish started with a very thick-cut piece of boneless sirloin cap, sometimes called a coulotte steak in French culinary terms. Our beef is sourced through Peter Sanagan which guarantees that it is a quality, locally-sourced and naturally raised product. Coulotte steaks, given their inherent leanness, are not recommended to be ordered rare; they reach optimal tenderness when cooked a little longer to a medium doneness. Precision becomes extremely important in order to assure a tender steak when dealing with these lesser used cuts, so it is a testament to our team in the kitchen for making this dish so popular (and tasty).

The dish was thoughtfully constructed. The steak itself, aged slightly to begin with, is further ‘turbo’ aged simply by laying it uncovered on a cooling rack and blasting with the refrigerator fan for many hours. The meat is then cooked to order and served with a spring and summer-inspired collection of accoutrements including delicate waxy new potatoes, charred shallots, a kale- walnut pesto and a massive, tempura-style fried spring onion parked on top of the finished steak – a slightly oblique take on an onion ring. It was a good dish, it looked stunning and tasted great, but Chef was right, it was time to change it up….but to what?

We kicked around some different cuts of beef that could be grilled such as skirt steak, bavettes, tri-tips and a few others, but it was not enough of a departure from the original dish to inspire us. Then Chef suggested a rib. It was summer; in the summer we eat ribs. He envisioned a big, succulent beef rib on a plate. A great idea that obviously required development – I mean, he was telling me this while juggling a busy service in the kitchen. Southern-style barbecue was out of the question – sure it’s tasty, but it’s definitely not our thing. So, I went off to ponder this notion of a rib.

Ribs are tricky because they can’t just be thrown on a grill and cooked to order. It’s a tough meat that typically requires some kind of initial slow cooking or other treatment. I wasn’t sure where to go with the rib without introducing wintery-style braising or the aforementioned southern smoke-house barbecue. My first idea was inspired by David Chang, the famous Korean-American chef that owns the Momofuku empire. I had been leafing through his cookbook and started thinking about kimchi, a Korean fermented cabbage dish and notably, a very trendy ingredient these days. This led my thoughts to Korean style ribs. These are short ribs that are cut very thinly, laterally across the bone for quick grilling. It goes without saying that the Beech Tree is not a Korean restaurant, nor does it aspire to be – I will leave that style of cooking to the experts. But why not run with the idea of a laterally cut, grilled rib served with fermented spicy cabbage? Beech Tree cooking is largely inspired by the British Isles, where the take on short ribs is to slow-braise them and serve with mashed potatoes– a comforting, somewhat stodgy dish typically reserved for a wet wool sweaters and dark December nights. It is certainly not something one would serve on a sultry mid-summer evening. But introducing this Korean notion of short ribs brings it all back to a smoky grill, back to hotter weather supping. Maybe we could come up with some kind of Beech Tree variation on the dish.

After dreaming all night about ribs and cabbage I brought my ideas to Chef in the morning. This was my original vision: a slightly thicker variation of a Korean-cut short rib (sometimes called a Miami short rib) would be slowly cooked in our Polyscience sous vide circulator (a new toy I had just purchased for the kitchen). It would be then cooled and stored until service. During service, it would be flash grilled to order and glazed in some kind of sweet and sticky dressing with ginger—maybe some kind of house-made take on a sweet and sour sauce – a nod to the Asian origins of the dish. With this we would serve a sort of English kimchi. Korean kimchi is pickled and fermented with flavourings of funky fish sauce and lots of spicy chilies. Why not replace the fish sauce with Worcestershire sauce? The latter is made from fermented anchovies, so there is a similarity there. Perhaps introduce good old fashioned black pepper, maybe horseradish to produce heat. Let it ferment a while, almost like German sauerkraut. Than serve this punchy fermented kimchi-like concoction with a glistening slab of tender grilled short rib on the bone. It sounded positively capital.

Sadly it didn’t work out. The attempt at the ‘English kimchi” resulted in something that the kitchen described as ‘bad food-court Chinese stir-fry”. The Worcestershire sauce turned all the vibrant vegetables a sinister-looking brown colour. The fermenting process was too unpredictable; we simply didn’t have the facilities in our little restaurant to make such a thing consistent.

Back to the drawing board.

So Chef experimented a bit and came up with something that was equally summery while keeping the original idea of the rib and cabbage. I think all dishes should tell a story and our final take on the dish captures summer, yet from completely unexpected angle. We stuck with the idea of cabbage, but instead of treating it like kimchi, we approached it like a summer coleslaw. The cabbage is shredded and tossed with some julienned carrots, green onions and some piquant chillies (a sly reference to the original kimchi concept). It is finished with a tangy dressing and is served slightly warmed. The next component was potato. Memories of foil baked potatoes on dad’s old charcoal barbecue manifest in a soft puree infused with the flavour of the baked skins (a flavouring method that harks back to El Bulli and Ferran Adria’s famous potato skin consommé). The puree is not served hot but just above room temperature, almost like a hummus, creating a clever double duty for the dish’s narrative: summer potato salad meets a smoky campfire baked potato. The crowning glory: a 36-hour sous-vided laterally-cut short rib, finished to order on the grill with multiple layers of a shiny, almost black, sticky glaze made from Worcestershire sauce brushed on the meat. Once off the grill, the meat gets a dusting of crunchy and very peppery bread crumbs, and finally, a fire-charred scallion is draped over the works to finish the dish; a pop of green colour on the slick, monolith-like darkness of the meat. The rib is absolutely succulent and because of the sous-vide process, it is actually cooked to a medium pink while being tender enough to cut with a spoon – it does not have the feel of a braised dish, instead, it has an almost ‘steak-like’ vibe to it. In the end, we sort of still had our steak dish – just from completely out of left field.

The dish was on the menu for about a week and it was very successful, selling out in the first two nights. But after personally sampling the dish and putting some thought into it, there was one thing about it that nagged Chef a little. The connective tissue around the actual rib bones did not break down the way they do with slow braising in a liquid medium. The sous vide breaks them down in a different way so that while soft and easily detached from the bone, they retained a texture that is a bit chewy —not necessarily unpleasant, just a bit unexpected. It was a small point, but something worth trying to perfect. We tried another cut of meat with the rather unappetizing descriptor of ‘chuck flap’. This was part of the same muscle group as the short rib, but a bit further down the cow from the ribs and naturally boneless. They are sometimes sold as ‘boneless shortribs’, ‘chuck steak’ or in French terms a paleron steak. This cut of meat however was tremendously difficult to attain uniformity from one serving to the next. Moreover, we had a heck of a time trying to market the dish in terms of what to call it (‘chuck flap’ does not sound like something I would want to eat, personally). Also, the lack of bone seemed to bring down the flavour quotient somewhat. We tried that cut for about a week or so, and again, it tasted great and sold well, but we still weren’t happy with it. A rib should have a bone, right? We were a bit perplexed about next steps when one of the servers mentioned that during the previous week, diners were sucking the bones dry. If I had taken the time to actually look at the empty plates coming back to the kitchen, we would have noticed that the all that remained on plates were a few cleanly picked bones. Despite our knit-picking about bone connective tissue, the diners did not give a fig about it. They happily consumed it, like one would the succulent bits of fat that ribbon a rib steak, or the crackling on a pork roast…or the lovely, oft overlooked, fleshy oyster on the underside of a chicken carcass. Sometimes to eat meat is to be a true carnivore. Our guests figured it out before we did. Cleaning the bones I would have to say is completely permitted in the Beech Tree…even encouraged. In the end, we went back to the bone-in short rib as originally planned and it was best decision we could have made.