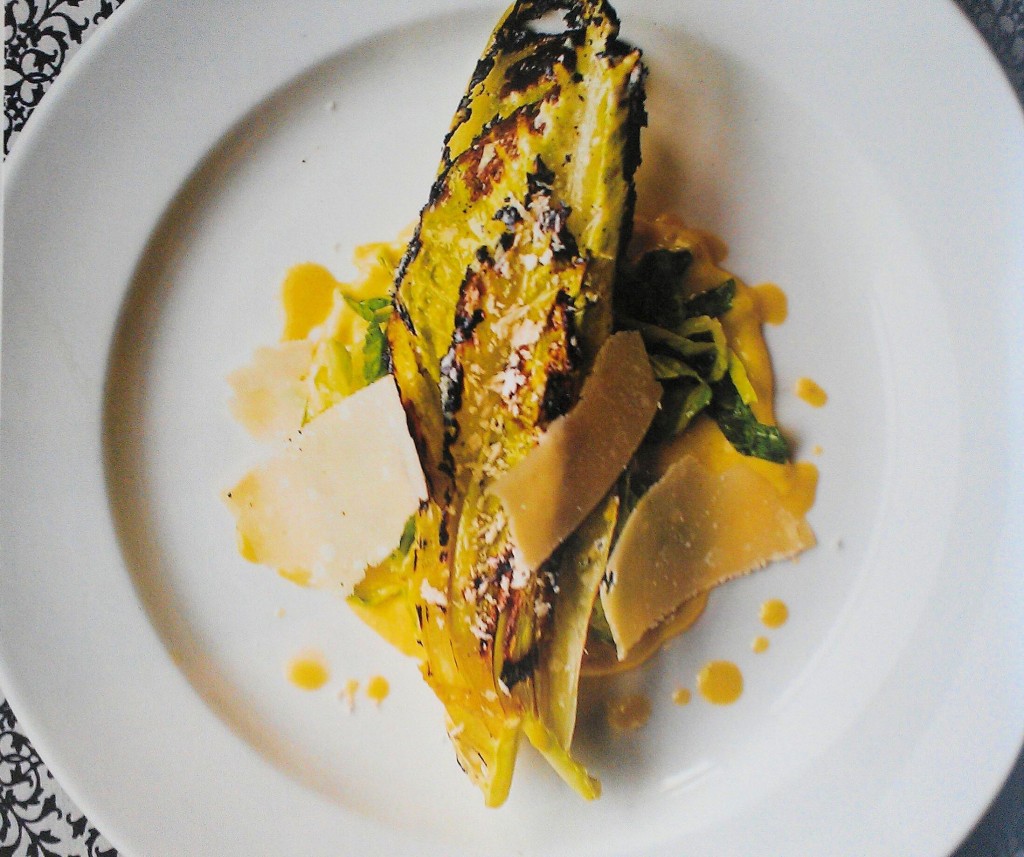 It was Tuesday, and I had a doctor’s appointment to look forward to. I had to be there at 3:30pm. My mother was coming to The Beech Tree (for the first time since opening). She would arrive for a 5:30pm reservation. We were winding down the last days before a full-staff one-week vacation for which the restaurant would be closed. I still had a million things to do before I could address these items, yet distractions are plenty on such days.

I was sitting in my restaurant at precisely 1:51pm, listening to Charles Mingus, and I felt the sudden  need to pour a half-pint of Beau’s Lug Tread.  I always like a sip of beer when I’m looking over new purchases. I was admiring the cover of a new book called Le Pigeon – Cooking at the Dirty Bird; the eponymous cookbook written by Gabriel Rucker, the chef at the now-famous Portland, Oregon bistro. The book is a hardcover and like all thick heavy books, a bit cumbersome when sharing the space on a deuce with my laptop, piles of invoices and now the addition of an early afternoon half-pint. I cracked the book and let the pages fall where they may and fate presented me with a recipe for grilled romaine and preserved lemon (pictured above – shamelessly scanned from the source). Simplicity in and of itself. A charred heart of romaine, Parmesan and two variations of lemons: a bright preserved lemon vinaigrette and a roasted lemon and honey dressing. The plate, something I’ve never tasted before, but for which I can intuitively determine, plays hot against cold, sour against creamy and juxtaposes an exterior of wilting blistered vegetation with an interior of cool, crisp and fresh.  These flavours are familiar; lemon, parm, romaine—a Ceasar salad for the cool kids. The plating is simple, iconic and sexy. This is what restaurant food should strive for. It is humbling.

I get moved, literally, emotionally moved by food. Cookbooks to me are not instructional, they are inspirational. They help me get inside the heads of great chefs, to understand what it is they are doing with their ingredients, perhaps to get a better understanding of why they are so successful and why their food is so exceptional. Each new book I buy will be consumed, every word read, every vivid photograph devoured until I feel I have at least scratched the surface of what the chef  is striving to accomplish. It is one thing to cook, it is another thing entirely to articulate the whats and whys of a dish. I suppose in some ways, the dynamic that has been developed between Chef and I is such that he cooks and I articulate.  I have been interviewed by various media and have spoken on behalf of Chef. This is the way we have always done it. He is focused on his art and not particularly interested in leaving the confines of the kitchen; instead, preferring late night commiserations in the quiet of the empty restaurant, dialogue over cold beers and cookbooks. This is not to say that he somehow lacks eloquence when discussing food, only that it is not a role he wishes to play.

For reasons that are not terribly clear, people have become very interested in chefs and restaurants; on prime time television, perhaps the best indicator of popular culture, restaurant and cooking related programs are ubiquitous. A quick surf through the television dial will conjure Gordon Ramsay’s grimacing mug ad infinitum (when was the last time he actually worked on a line I wonder).  It is not enough to cook tasty food and provide good service these days – chefs are now getting out in front of cameras, tweeting their every thought, appearing on talk shows, writing books and articles. Being a chef has become complicated.  Perhaps partnerships like ours are a way to navigating this recent phenomenon without getting lost in the process. Really, only time will tell.

In the first months after opening, likely during the hardest winter Toronto has seen in decades,  I spent sixteen hours a day working in my restaurant. It felt dark and endless and frightening. It is a lonely feeling; there are many parallels to first time parenthood.  I am still amazed that I came out the other side in one piece. Chef David Chang said it best: opening  a restaurant is the worst feeling in the world.

I also now know it gets better, and if you’re lucky like I am, it actually becomes amazing. In any event, back in those difficult, early days, while my wife and children were asleep in their beds and the snow swirled outside, Chef and I would watch youtube cooking demos into the wee hours of the night.  Michelin star British chefs, Modernist Cuisine demos, Raymond Blanc, the original River Cottage series, and even ancient BBC cooking shows featuring the Roux brothers or Kieth Floyd were all proper fodder for cooking inspiration in a restaurant that had only four wines on its list and three staff to run the joint. Those late night drinking sessions helped cement what we would become as a restaurant, and perhaps more broadly, our food concept.

With a tough winter under our belt, the Beech Tree went on to enjoy an exceptional summer with a packed house almost every night, great staff and an amazingly supportive clientele. We have shot a promotional video (to be released in a couple of weeks), we’ve had some good press and we have banged out some delicious and inventive dishes that celebrate all that is fresh and local in Ontario during the season of plenty. Those cold days of January seem like an eternity away now.

Now, we may not always have the time to watch cooking videos, but regular additions to our cook book library is part of the process of inspiration. Le Pigeon is one of many books that have inspired me, moved me to stop a moment, pour a beer, and stare dreamily at the shimmery damask wallpaper in my restaurant and wonder about the next big thing. Because there will be a next big thing. Trust me.

Until then I’ll keep buying cook books and writing blogs.

Post script: The Doctor pronounced me to be in good health, and  my mom, by the way, ordered the burger. We are now off to get some rest before starting all over again after Labour day.